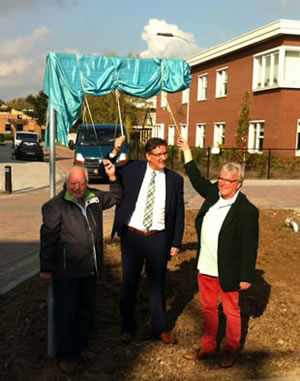 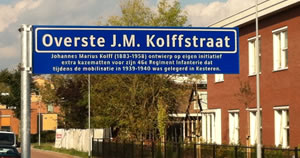 (Below English translation of press release municipality of Neder-Betuwe, 15 October 2014; names adjusted where necessary because of use on this site and links added)

Before the ceremony the invitees were recieved in the new hall of De Schutse. After his word of welcome alderman Keuken spoke on the beautiful area that was now created in the middle of the town on the grounds of the former auction. In the area are a complex of apparments, residential homes, a new church of the Hersteld Hervormde Gemeente ‘De Fontein’ and the new extension of De Schutse. All at Overste J.M. Kolffstraat. These are projects created by developers Habion, Bunte Vastgoed, and construction company Van Driesten. 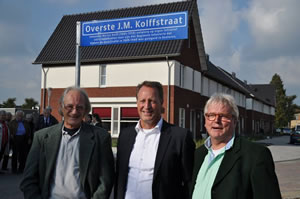 Followed Kobus van Ingen of the Historische Kring Kesteren en Omstreken about Overste Johannes Marius Kolff, commander of the 46th Regiment Infantry, encamped at Kesteren at the time of the mobilisation in 1939 at the so-named Betuwestelling.
The basis of this line of fortifications was the line dike constructed in 1799 which ran from De Spees on the river Rhine to Ochten on the river Waal. This line dike was in bad condition in 1939. For decades nothing had been done on its maintenance. Netherlands’ rearmament had gradually begun since the mid of the 1930s and also the Betuwestelling (Betuwe fortifications) was redeveloped supervised by Bureau Stellingbouw. Seven kazematten casemates would be placed.
Commander J.M. Kolff thought this was far too few and also considered the planned time of the contruction way too long. In October 1939 he asked the Commandant Veldleger permission and funds to to construct casemates under his own supervision. He got the permission. With a contruction team set up out of his own men finally 24 casemates were built. 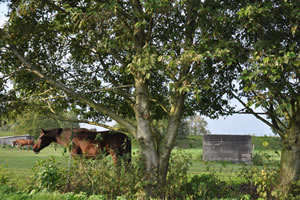 On behalf of the Kolff family grandson Marius, J.M. for named after Johannes Marius, thanked the community for naming this street after father and grandfather Kolff: “A great honour and also an emotional moment because the revelation can take place on the presence of one of his sons, grandchildren, and other family members.” He read a passage from the diary that J.M. Kolff kept during and after WWII.

After the ceremony alderman Keuken presented the Kolff family with a same streetsign ’to bring home.’ “It wil get a place in our family home”, says Marius. A special word of thanks by the alderman for the residents of De Schutse and the staff for the excellent service and delicious food of the kitchen group. “It was superb!”

The word casemate is derived from the Italian casamatta’ or the Spanish casamata’, both of these from the Byzantine meaning ‘chasmata’, which indicates a fortress with whole for shooting. Sometimes they are names as ‘bunkers’.

Images:
top: the streetsign; below that: revealing of the streetsign;
third from top: three grandsons of Overste J.M. Kolff, who were all three named after him, so three times Johannes Marius Kolff, resp. from left to right, in their respect the sons of Jan (CBCD XVIIx), Pieter Cornelis (CBCD XVIIy) and Herman (CBCD XVIIw);
bottom left: Kolff-casemate at Kesteren (2014)