In The Family and our Rivers I showed how intense the relation is between the Kolff family and the big rivers in our country (the Netherlands [Ed.]). This applies mainly to the period 1600-1740, although this connection has stayed with some family members up to the present day. Whichever way one looks at them, as boatsmen or vicars, ar rheir marriages, or at the places where they settled themselves: all of these years Kolffs lived from Nijmegen up to the Dutch estuaries. Facing the waters and earning their daily bread, directly or indirectly, thanks to inland navigation and sweet water fishing.

Pieter Nouwt, MA, who does historical research on assignment for the Kolff family, has recently found much material that illustrates, even confronts us with this aspect of the family history. Not many families will be researching the toll registers of the big rivers in which – if they were not lost – all the movements of freight ships can be followed. For us the registers of the tolls on the river Waal at Nijmegen, Tiel, and Zaltbommel add a lot to understand the lives of Wolter Woltersz. Kolff (approx. 1579-1635), his widow Peterken van Niedecke (approx. 1585-1649) and their son Wouter Kolff (1610-1654). All three of them managed shipping companies. Father Wouter (or Wolter, both names are used) had worked on a warship until the year 1600, its base being Geertruidenberg. In those years there was still a lot of fighting going on about the navigation rights on the rivers Maas and Waal.

However in that very year 1600 Prince Maurits conquered the fortresses of Crèvecoeur and St. Andries. Both fortresses very strategically positioned between the two rivers, at the place where the Land van Maas en Waal and the Bommelerwaard almost touched each other (1). The result of Maurits’ successes was that the river Waal became safely navigable from Nijmegen, via Tiel and Zaltbommel, up to Gorinchem. Wouter made use of that. In april 1601 he married at Nijmegen and ten days later he was registered as citizen of that city. For a boatsman – for that was what he then probably already was – citizenship was of crucial importance. Nijmegen citizens, after all, did not have to pay tolls sailing the river for freight that was their property. Only in case they took on freight from non-citizens they were charged.
Business went well. In 1617 Wouter had become one of “the fourteen”, likely something as the board of the guild of boatsmen. Wouter and Peterken exchanged their ‘caeghschuyt’ for a true carvel, which they bought from an Arnhem skipper. 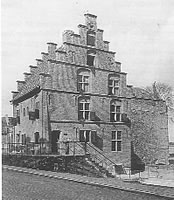 This transaction left them with a debt of 525 guilders, a sum they promised to pay back in five years. This financial obligation did not stop them from buying – in the same year – a houseDe Drie Colven, that is to say: three-quarters of it, in the Steenstraat. The house well-known in the family, with the sign “De Drie Colven”. In 1626 they bought a second house at Nijmegen. It is likely that they thanked their fortune for the greater part on the transport of building materials, aspecially tuff, at their own account. So they were also merchants. In 1628 – and most likely on other occasions as well – Wouter bought from the city of Nijmegen, at the price of 1 guilder a ton, a certain quantity of tuff that came from the ruins of the Ten Hessenberch convent (2). However the year before already shows that he had sailed downstream towards Tiel – along the toll – at least four times with quantities of 80, 100, 60, and again 80 tons of tuff, on his own account. The following year, of which the registers are incomplete, shows him sailing twice along Tiel, one time with 170 tons of tuff (in two ships) and the other time with 160 (in one ship) tons. Of this last account 100 tons were on account of another citizen of Nijmegen. Although many of the registers are lost this pattern seems to continue up to the death of Wouter in 1635.

Upstream he usually did not take much more that some cargo such as cargoes of beer, at times eleven cargoes of rye (these eleven on another persons’ account), some cargoes of barley, a few tons of herring and a vat of brandy, all for his own account. The constant factor is the downstream transport of tuff, most likely the greatest profit came from that. (3)

After Wouter died Peterken continued the business. For a number of years she is noted as “the widow of Wouter Colff, citizen(ess) of Nijmegen” in the toll registers of Tiel and Zaltbommel. The transport of stones on her own account remained of great importance; however now they were more bricks and, less in quantity, flagstones (so called “estrikken”) and tiles, and they were transported upstream.

These stones must have come from factories along the river Waal or from even further downstream, although they were sometimes described as Yssel-stones. No longer it was about tons, but numbers is what we find: 24.000 stones is the greatest number we find in the registers being the cargo at one voyage. Only sometimes it went upstream with another cargo of Peterkens’ “kaege” (I think: type of carvel [Ed.]) such as on July 24, 1637, when it moored at Zaltbommel with a cargo of wheat, soap, sea salt, cheese, brandy, fish, vinegar, “some pedlary” (“wat kramerije”), a droogvat (?) (I am not able to translate this [Ed.], likely to be an empty barrel), and cotton bags. During these years, it seems, one went downstream most often unloaded and so one did not report at the tolls. Profit now came from upstream trade. Gradually Wouter, Peterkens’ son, took over the business. After all he was 25 years of age when his father died. Halfway the 1640’s the transport of stones seems to end. In this time of peace prosperity grew. As cargo we now see the earlier found materials that Peterken transported, however now and then the ships were replenished with French and Spanish wines, distilled “waters”(upstream) and copper barrels (both up- and downstream) (4).

The last details that Mr. Nouwt has found so far date from the year 1648, the year of the peace. Peterken died 1649. Wouter must have stayed skipper till his death in 1654, but his widow, Maria van Heteren, has probably not continued his business. She must have been busy most of the time with her clergycal profession and also with the education of her son, who was to become a minister in church. But this is another story.

“The Merchant and the Minister” is a phrase that outlines the 17th century history of the Kolffs quite well. This contribution has been limited to the first of the two professions.