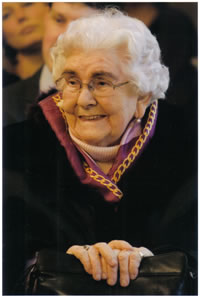 Not long before the publication of De Colve 2011 we recieved the sad message of the death of Coby (Jacoba Elisabeth). With her death the B branch of the Kolff Family has died out. A memorandum for Coby Kolff will appear in the next De Colve (2012).

Just as in other branches of the Kolff Family branch B had it’s noteable Kolffs. The family in which Coby grew up was special as well: the mayor’s family on the island of Wieringen at the time the German Crown Prince was in exile on this island after he sought political asylum in the Netherlands. Prince Friedrich Wilhelm surely has held Coby in his arms when she was a baby. Shortly after Coby was born her father succeeded his father as the mayor on the island.

Of one of the other famous people from this notorious branch B of the Family: Kapitein-Luitenant ter Zee Dirk Hendrik Kolff (B XIId), one of the direct ancestors of Coby, a biography will appear following an intiative of the Kolff Family.

It is sad that this notorious branch B of the Family Kolff now has died out. All the more reason to welcome the biography of Dirk Hendrik in this very same year.