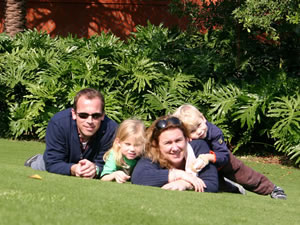 19th August 2008, a hot, dark day with average high temperatures close to 30 degrees C and enough humidity in the air to make the clothes stick to your back, marks our arrival back in Japan after a 10-year ‘break’ in Holland and Hong Kong. We had not intended to come back so soon, at least not until well into retirement when we would make a leisurely trip down memory lane, but here we are again ready to rediscover the Land of the Rising Sun. This time our starting point could not be more different; these past 10 years have morphed us from DINK Tokyoites into Yokohama Suburbanites. Now we go out on our trips with Eline and Rens who fortunately generally appear to be just as keen to discover Japan as we are. Here I must add that trips are carefully planned to avoid an overkill of any one ‘boring’ aspect – don’t expect to see 3 temples or shrines on one day in Kyoto; cater a visit to the handicraft centre where you end up painting Japanese New Year’s Bells for the afternoon! Trips are one thing however; living and working in a country such as Japan is really quite another voyage of discovery.
One of the first things you notice about Japan – apart from it being absurdly expensive for certain things ranging from long distance train travel to brown bread with a crust – is that you really do need to speak some Japanese.

The Japanese generally speak very poor English so if you can string more than 3 Japanese words together their relief is so palpable they often use honorifics, which does not help you much in deciphering what they are saying. I invariably hear “Nihon-go wa jozu desu ne!” which means “Whooh! You speak great Japanese!”, for the mere fact that I can tell the taxi driver how to get to my house or order lunch. Naturally my self-esteem has on occasion soared to unknown levels with these types of daily comments, but at other times when outside the realms of taxis, restaurants and shops, frustration levels have also dropped to new lows. So I continue to persevere with my “Nihon-go” from 10 years ago with weekly lessons and the incentive of taking an official state exam in December 2009 to actually progress from taxis and shops to more elevated topics. At his work as General Manager of the Lighting division with Philips, Jeroen can also ‘wing it’ with his basic Japanese as most colleagues speak English and when meeting clients an interpreter is used. The children are in fact not learning any Japanese at their international school as their Japanese lessons have been substituted for Dutch lessons, which we felt would probably be more useful for them in the long run. Needless to say they now think I am fluent in Japanese; I just wonder how long the illusion will last… 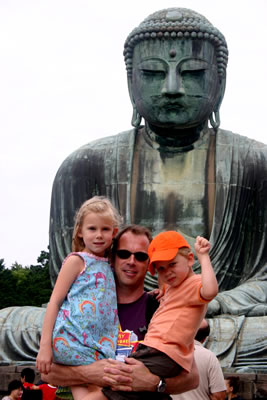 Having both previously experienced working life in Japan, we knew before returning that it could be a very testing experience. In certain respects that still holds true; at work Jeroen still experiences inefficient long working hours, risk adverse behaviour and from our perspective ‘beating around the bush’. On the other hand relationships are very important and once these have been established as ‘trustful’ you can get a lot done. How the current worldwide recession, which has hit Japan’s export driven economy particularly hard, may propel changes such as the further erosion of the concept of lifetime employment and the ‘salary man’ remains to be seen. We hope to stay here for the coming time to see some changes for the positive.
Another aspect of Japan which you notice immediately upon arrival during the 1,5 hour trip from the airport to the city is the immense sprawling nature of Tokyo. The Greater Tokyo area, which includes Kanagawa, the prefecture we live in, counts over 34 million inhabitants covering an area of 13,500m2 according to Wikipedia. Although generally increased in number and height over the last 10 years, you will not see many high-rise buildings for a city of this size. I suppose this has a lot to do with the frequent earthquakes, which at times can be felt weekly. Our 2-storey wooden house feels particularly prone to shaking from earthquakes, but apart from registering with the embassy in the case of a disaster and an earthquake kit by the front door, you learn to get on and live with these tremblings. A new experience was volcanic ash on the car on a Monday morning this February from an eruption at Mount Asama, about 170km northwest of our house. Needless to say we took a picture, then got in the car and left for school.

Of course such a large city with limited parking spaces (you need to prove you have a parking place at your house before you can buy a car), has an excellent public transport system. The tricky part is that from major stations there are many types of trains of the same ‘line’ riding the same routes but stopping at different stations. To ease these inconveniences the Japanese have a number of very helpful transport ‘mod-cons’.

Platforms are covered in coloured lines to show you where to stand so that you are right in front of the train door when it stops (no pushing and shoving either but neat orderly queues), frequent platform jingles assault your ears to warn you of approaching trains and closing of doors, and in-carriage displays above the door to let you know how long it will take to get to the next station. Despite these aides, believe me, you can still get lost! Being a woman travelling home late at night (but before midnight when the trains stop), has also been catered for with special Ladies Only Carriages. This is where you are safe from intoxicated unwanted roaming hands for the journey home! And forget about using your cell phone on the train – this is a definite no-no! 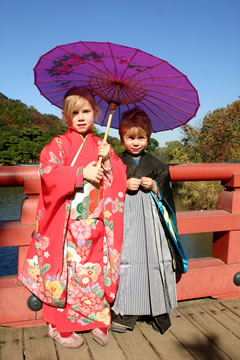 From a foreigner’s point of view Japan is a country for some very interesting observations, which hint at a very different culture to your own. Once you actually start writing them down, you realize there are so many more; the Japanese obsession with food (which Eline and Rens also enjoy eating very much), the Japanese comic “manga” magazines read by grown-ups, people in deep sleep whilst standing in a moving train, coiffured and dressed up dogs walked around in buggies, heated toilet seats with many unusual functions which unfortunately do not come with an English manual, the beauty of the countryside, the sereneness of the Shinto shrines and bustle of the Buddhist temples, the friendliness of many Japanese once they get past the initial shock that you speak some Japanese, the obsession with cherry blossoms (rather like skating on natural ice in Holland I would say)… If you are interested in seeing everyday pictures of Japan, please have a look at my website: Foreign Eye.Even second time round there is still a lot to be discovered and now we are once again in the ‘middle’ of the globe with my sister Gwen and grandmother in Holland, my brother Lennard in Australia, my parents Leo and Edith in Turkey, we hope to see them and friends come and visit soon!