An article in the local Groot Wassenaar, June 6, 1996, got the attention of the editors. Marius (CBCD XVIIw4) gave some addittional information: “My father had three children when he married my mother. After that they had five more. So in the end we lived with eight children in the house.” 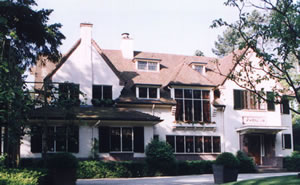 “The name opa (grandfather) and oma (grandmother), Jan and Ella Kolff-van der Giessen (CBCD XVIv) gave to the house, ‘Duin en Dennen’ (‘Dune and Pines’) had to do with the nature area in which the house was situated. A test-plant area of Staatsbosbeheer of pines in the dunes. The test seemed succesful: the Corsican pines seemed to do well – and were planted in many other dunes…

Today some people think different about that. They seem to take too much water from the soil and nowadays municipal employed biologists want to get rid of them. A lot of protest exists against that because the pines look beautiful in the dunes. The dunes and pines were the reason for the choice of oma and opa for Wassenaar. Opa wanted to live at the Veluwe in the midst of the existing pines there. Oma preferred the sea and the dunes (this choice may well have been vice versa…). Just at the time of their desire to buy, Staatsbosbeheer decided to sell the test-plant, so for opa and oma the choice became easier: here they both found what they wanted. The idea for the name ‘Duin en Dennen’ (Dune and Firs) may be clear”.

Apart from this Marius makes some remarks on Warmond: “Opa and oma were ordered to leave the house during the occupation time (WWII, for the Netherlands: 1940-1945 [Ed.]). Amoungst other places they lived on a house-boat at Warmond. This boat was situated near one of the greater Warmond homes, where Sara worked as a housekeeper. Sara originated from Hansweert (Zeeland). Oma and Sara got along very well. After the occupation oma and opa could move back to the house, and Sara came with them. She was in charge of the housekeeping. All of the eight children have the best memories of Sara. Most of them were fed – with the bottle – by Sara. I have had the opportunity to spend many holidays in the little house with the water pump and the outdoor closet at Hansweert. Often Sara went home for a holiday to Hansweert, where her father was the keeper of the locks, I was allowed to travel with her. The journey by train to Goes (the G is pronouced there as an H, Dutch ‘oe’ stands for English ‘u’ or ‘oo’, so pronounce this as Hoos) was in itself an adventure for me, but even better was the travelling in an old bus across cobbly roads from Goes to Hansweert.”

“Many years later ‘Duin en Dennen’ was sold and oma moved to the care takers’ cottage and Sara went with her. That was not succesful. The small house, even though it had two sitting rooms and several bedrooms) was too small for the two of them, and Sara left (I still remember the tears [Marius, ed.]). Often I visited Sara at her subsequent employers.”
Worth mentioning is that at ‘Duin en Dennen’ many of the Kolff Association meetings have been held.

First, an anecdote on Tineke Kolff-Sutherland (CBCD XVIIw) and the house Duin en Dennen.
From Wassenaar in de Tweede Wereldoorlog [Wassenaar in the Second World War] (see sources at the next page of De Colve II).

From Wassenaar in de Tweede Wereldoorlog [Wassenaar in the Second World War] (see sources at the next page of De Colve II).
“Also Mrs. C.C.W.F. Kolff-Sutherland had once been picked up by the ‘Voluntary Police’ for being in the open during an air raid. They brought her to their ‘barracks’ (the ‘Duin en Dennen’ villa) at the Koekoekslaan, off all places the house of her future parents-in-law, where she had to peal potatoes for the officers” (the image, at left, of Tineke dates from 1947). At the time she was brought there in the Second World War she didn’t know that this would be, later, her home for so many years, after she married Herman, raised the three children from his previous marriage, and the five children that would be born here from her.
The article that was included in De Colve was based on a publication (6 June 1996) in ‘Groot Wassenaar’, a local advertorial. After this page follows that publication which gave the idea to include a ‘Duin en Dennen’ page in De Colve II. The publication itself, at the next page, was not included in De Colve. At this website we include that interview. 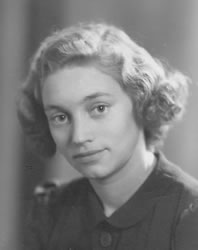 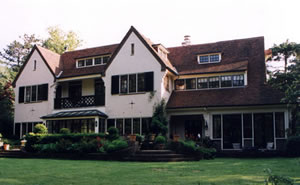 In a pensive mood Tineke Kolff-Sutherland looks at the pond at the former residence of her father-in-law, where she herself has also lived for many years. “I think”, she says, “there must still be many Dinky Toys of my children at the bottom of this pond.” The pre-war villa behind her is beautiful, and the dune landscape around it is breathtaking. This is how all of Wassenaar must have looked like in former days. The Villa Nijenhorst at the Koekoekslaan is for sale for quite a long time now. Because there are no residents Carel van der Schalk Kamberg of Schouwenhage estate agents agreed to show us around in this capital villa. It is always nice to see which ideas the pre-war ‘rich’ had (the house was built in 1925) in building their own villa’s.
The entrance immediately strikes as impressive. A great hall with an open fire place and a wide ‘luxury’ staircase leading to the upper floor. From the hall one has a view into the living room, which connects to other rooms such as the Herenkamer (Gentleman’s Room), the dining room, and the closed veranda, all of them interconnected. And all of them with a splendid view onto a garden on which’s beauty we will happily come back later.
A kitchen at which the cook of an orphanage would be able to move with ease and other smaller servant quarters complete the ground floor plan. At the first floor, and on the attic, the same applies. Many, many bedrooms, three bathrooms, showers, dressing rooms, in short, a ‘bak’ (cannot translate this: simply said: large house, Ed.) of a house.

Kolff
It is not hard to get details on the origin of the house, because the son of the first owner is still living at Wassenaar. Herman Kolff (CBCD XVIIw – Member of Honour of the Association [Ed.]): “My father was a Rotterdammer and he owned a (river) Rhine shipping company named ‘Helvetia’. When he was forty years of age he sold this business to a French group and since then he never worked again.” This story confirms the assertion that aspecially the southern part of Wassenaar grew from wealthy Rotterdammers, who preferred – from the beginning of the 1920s – to live in the Wassenaar dunes rather than the ‘bare’ Rotterdam suburbs with villa’s at Hillegersberg and Kralingen.

Garden
So Herman’s father, Jan Kolff, had feathered his nest and bought, in 1925, land at the Koekoekslaan in Wassenaar; a piece of land estimated at 10,000 square meters. “Our garden,” Herman continues, “stretched from the Schouwweg up to the Konijnenlaan. At the Schouwweg side my father had a tennis court laid out, further there were a duck pond, rabbit shelters, a vegetable garden, and more of those kind of funny features.”
Because of the sale of parts of it, the grounds are now somewhat smaller, but still number something like 6,000 square meters.

Dune
“Herman’s father,” his wife Tineke Kolff-Sutherland takes over the conversation, “named the house Duin en Dennen (Dune and Pines). What a pity that they changed the name, for look at it, the major part of the grounds consists of dunes and pine trees.”
One can hardly speak of a garden here. From the terraces, whereafter a lawn and a pond have been laid out, one notices nothing but beautiful old dune landscape, wavying up and down, at which trees and bushes can grow as they like.
Tineke and Herman had five children at this house, “and with them,” continues Tineke, “I raised three children from Herman’s previous marriage”, “It was a paradise,” she sighs, “and a more romantic playground for the children one can hardly imagine. By dinner time I sounded the great bell, that hung at the side of the house, to get the children back inside.”

War
During the occupation years (1940-1945) the house was confiscated. At first by the Grüne Polizei and after that by the Dutch NSB. The Kolff family found shelter, amongst other places, at Warmond. In the publication Wassenaar in de Tweede Wereldoorlog this house, and a picture of it, is mentioned on page 270. Many Wassenaarders have been interrogated and were tortured here. In more recent years the house has been leased to foreigners. Janine Poot, a resident – with husband and three children – of the former porters’ lodge of the house Duin en Dennen, at Konijnenlaan, says: “The last tenants were Americans, who kept a lot of pets. One day I brought them back a rabbit, that had wondered up to my garden, and I heard in the living a snoring sound. That came from a little pig (hangbuikzwijn, Ed.) that was running around there. One may hope that the new owners have a good sense of the beauty of this old dune landscape, for anyone who cuts down anything such as a bush or a tree, ought to be jailed.”